Do you remember cryptokitties, the phenomenal blockchain-based game. Let’s look back at this game, Cryptokitties is a virtual block-based game that allows players to adopt, raise, and trade virtual cats. The game was created by Vancouver-based blockchain company Axiom Zen. However, what is really important to remember is that this is the first known DAPP application for recreation and recreation.
Cryptokitties sales have gone through the roof. People have spent over twelve million dollars buying these cryptokitties. There have even been reports of people making more money trading cyptokitties than investing in their IRA!
In late November 2017, design studio Axiom Zen launched CryptoKitties, a Pokemon-style game built on the Ethereum blockchain network. There, you can buy and collect virtual cats, and breed them in the hope of creating new cats with special attributes. The presentation may be said to be familiar, but every transaction there uses cryptocurrency.
Every digital cat in CryptoKitties belongs to the user entirely. They are only one in the whole game; cannot be duplicated, taken by others, or destroyed. The most special aspect of the game is its breeding system: when two cats are “matched”, the cubs are completely unique – including in appearance, biography and characteristics.
The kittens’ unique traits are the result of the 256-bit genomes of their parents, resulting in about four billion different genetic variations. Then why a cat? On its website, Axiom Zen explains jokingly: “Because cats are so hard to understand. They were the ambassadors of the Pharaohs, appearing in memes and on your mother’s Facebook page. Cats never discriminate, because they hate every human being fairly. ”
The game is equipped with 100 “Founder Kitties”. There is also a new ‘Gen 0’ cat that is released every 15 minutes, served at the average price of five sold plus a 50 percent discount. Their price will continue to fall within 24 hours until someone buys them. Players can also sell their cats via auction. You are welcome to set the starting and ending prices with the digital currency ETH (ether, cryptocurrency Ethereum).
So suppose I choose a starting price of 1 ETH and an ending price of 0 ETH, and then someone buys it within 12 hours of the auction starting, he pays me 0.5 ETH.
In order to breed them, you can specify the amount of ether so that other players can mate their cats with our digital pets, and henceforth, they are eligible for kittens. Alternatively, you can pay ether to pair her with another cat and get her kitten.

Kitty fight is a game where cats/kittens fight each other based on crowd-based actions. Just like how the cheering crowd at a boxing match motives boxers to box, in the case of kittyFight, the crowd bet on each kitty they are in support of, causing their kitty the other opponent. The people/crowd choose which cat to bet on, resulting in action on the part of the chosen cat. The actions are random bets placed on the blockchain. The outcome of the betting results of each crowd participant causes events emitted from the blockchain api service to the front-end/UX resulting in kitty animation actions (punching, scratching, etc). The actions result in damage which is reflected in the opposing cat through vibration and or shaking or blocks.

When there is no action for 10 seconds [No events emitted from blockchain for 10 seconds], there are simulated actions called “idling actions-with sound and reaction” that are carried out by each kitty in turn. Basically, during the idling cycle kitties shadow box each other, and dodge the actions/hits with a slight ducking, but keeping the game interactivity and continuity going, to keep the game enjoyable without actual damage. The winner of the game is the kitty that sustained the least damage.
KittieFIGHT adds utility for Cryptokitties users and cut down on the oversupply of kitties on the Cryptokitties platform. It is also an interesting experiment in gamified demand in a Token economy utilizing a utility ERC 2O token called KTY, which is tightly integrated with with UNISWAP AMM. KTY has various fee burning and spending needs for game participation, without the need for users to directly hold KTY.

A dutch auction is an auction where a batch of tokens set set up to be sold to the public using a process that allows buyers to determine the price of the tokens. The process works like this :

Imagine a batch of tokens is set up in a smart contract with the following guiding parameters about the sale:

Imagine that a scarce resource batch of 100 tokens are to be sold at a starting price of $10 each and minimum price at $1, with the price gradually decreasing every second towards the $1 mark and over a predetermined auction duration time.

Some people may buy the token at $7 really early or $5, $4, most at $3 and the token sells out at $2.5. The Exciting thing is that every one gets to pay $2.5 per token, balancing first mover advantage with democratic price allocation. This auction process makes it a fair way to make sure everyone who really wanted the limited available tokens, got them and everyone else is happy with the price. KTY Token will be distributed in the fair manner described above allowing early holders to acquire our tokens for use in the KTY Volcano yield mining program to earn even more KTY and SDAO tokens as the main KittieFIGHT lending and gaming protocol is launched unto the Ethereum Main net.

The KittieFIGHT Yield Farming Volcano Faucet distributes KTY and SDAO tokens to Yield Farmers who provide liquidity on Uniswap V2 while staking uniswap liquidity pool tokens in the Volcano yield farming contract. The more liquidity you provide, and for longer, over 6 months program duration, the greater share of the KTY and SDAO token pools you receive. 7% (or 7,000,000 ) of the total fixed KTY token supply and 7% (or 7,000,000 ) of the total fixed SDAO token supply is allocated to the 6 month program duration. 10% (700,000 KTY & 700,000 SDAO) of the program allocations are auto awarded to yield farmers who participate within the first 7 days of the volcano program launch, and as long as they continue till the end of the program duration. 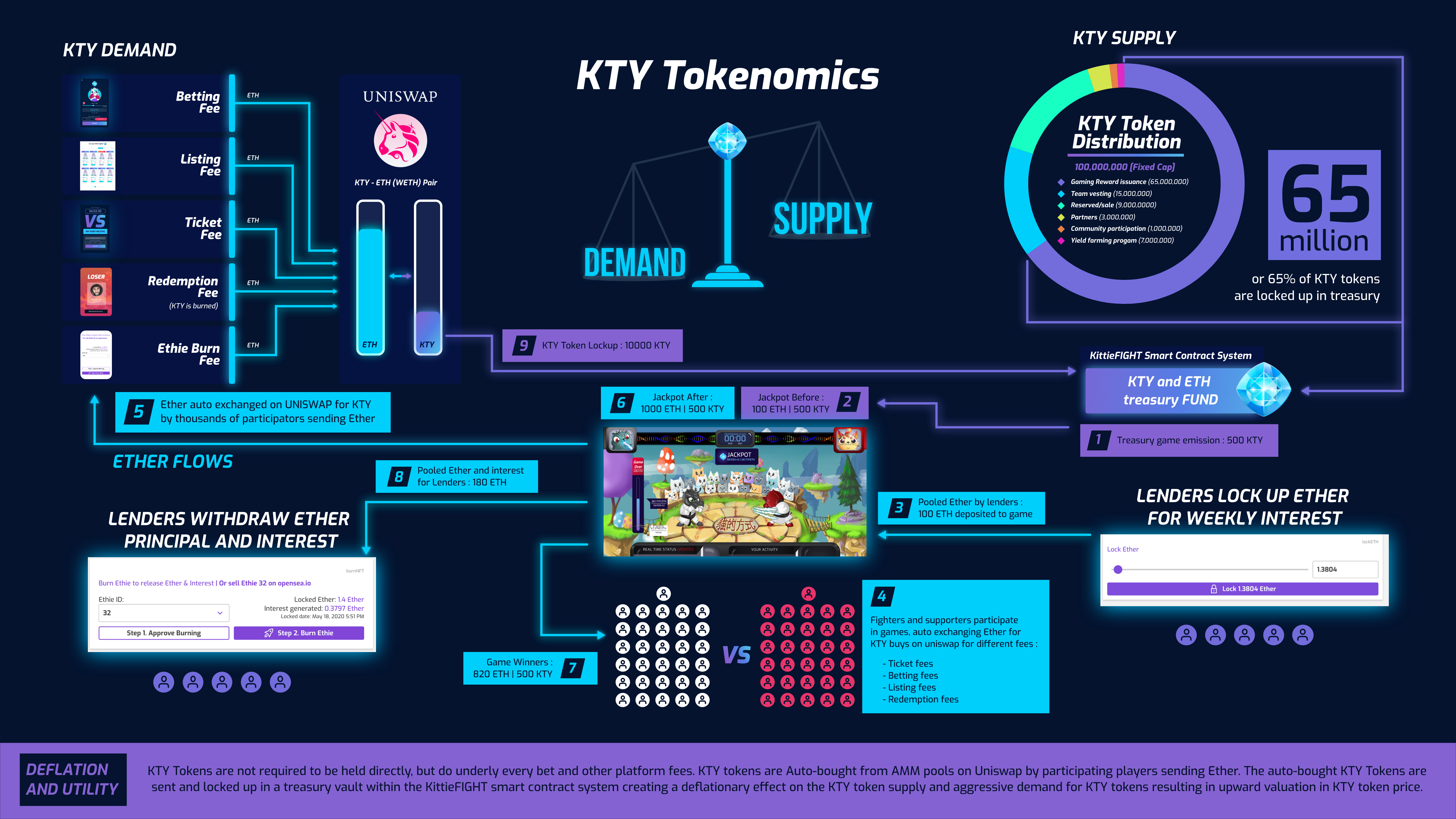 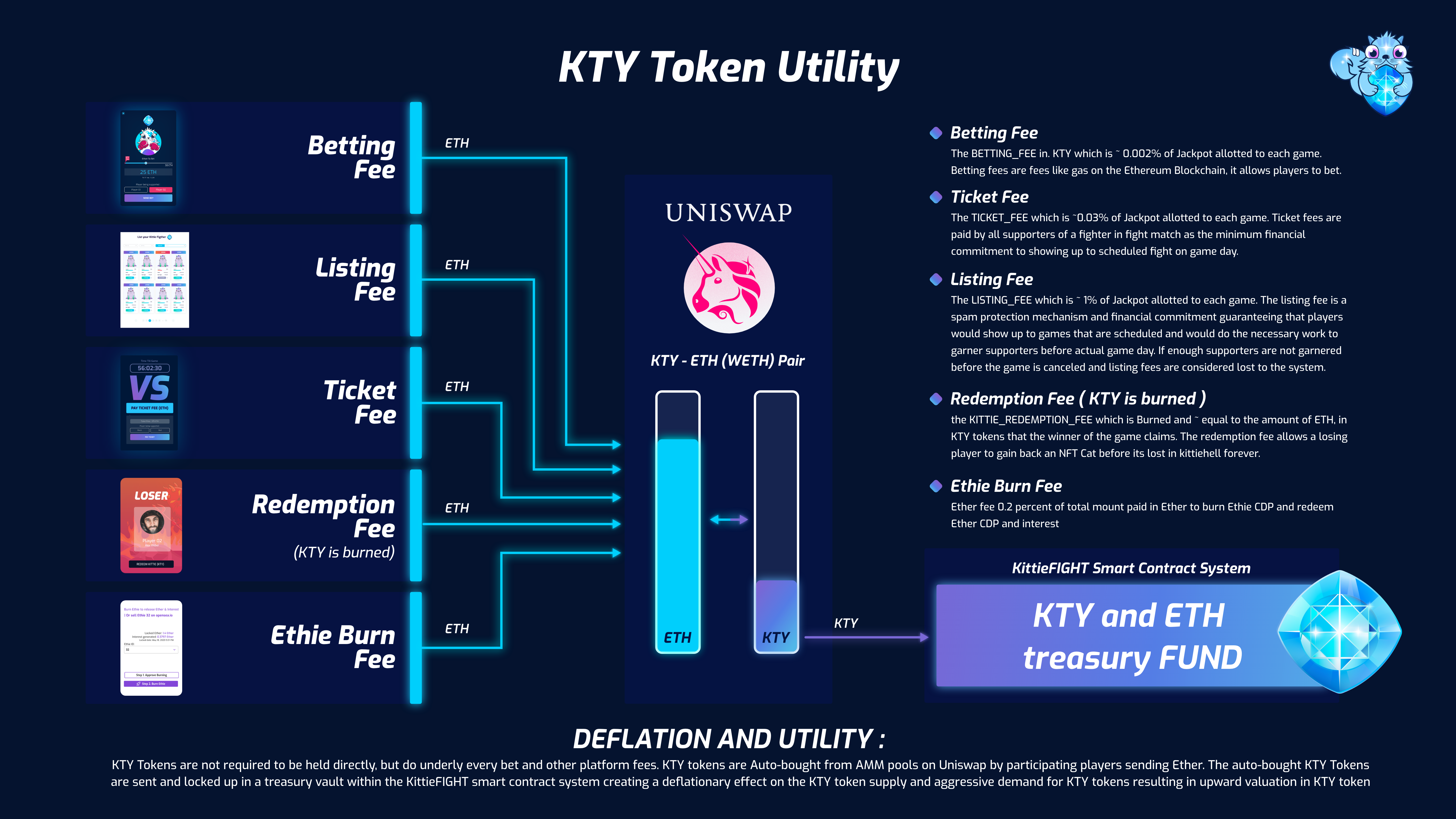 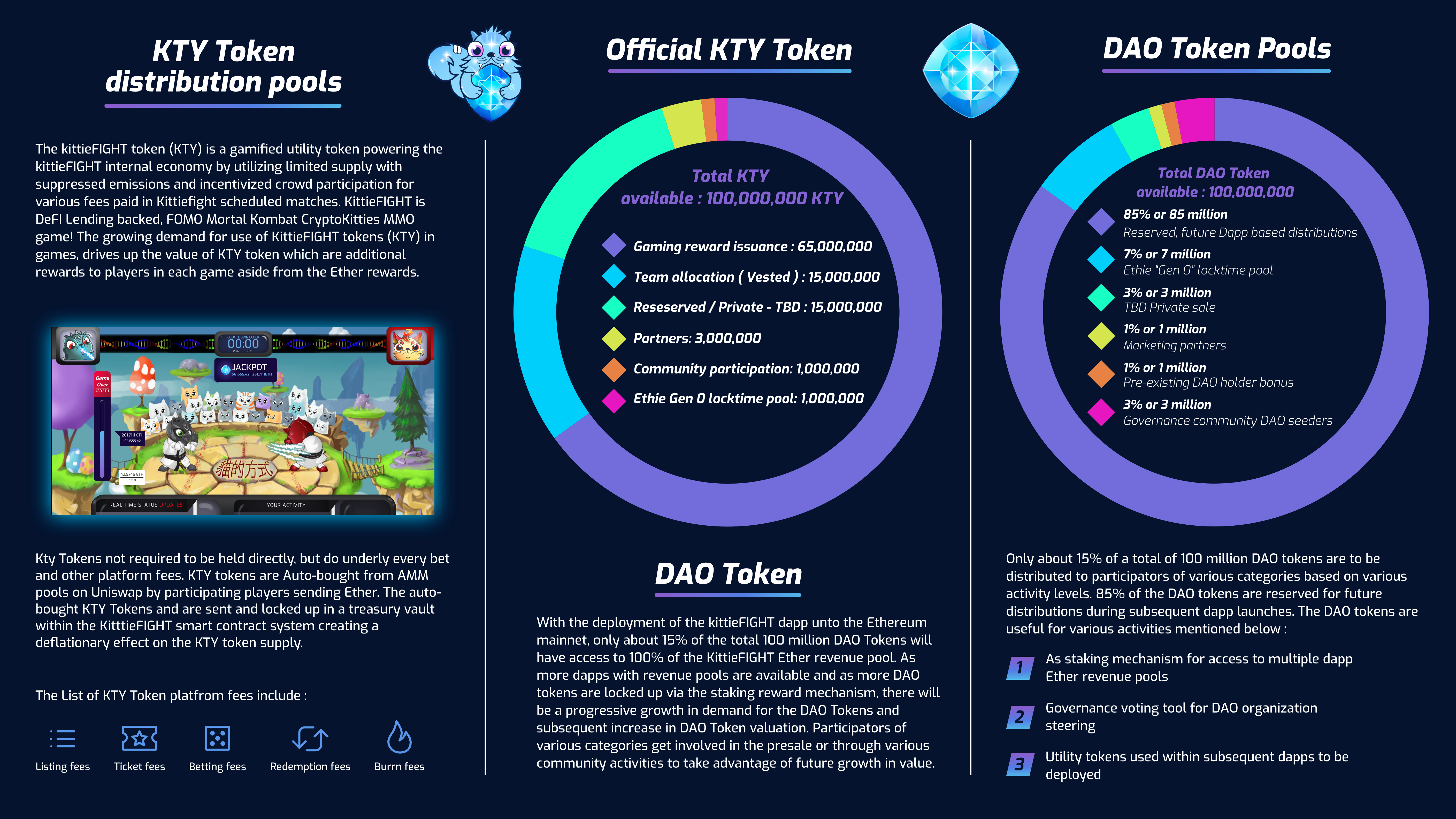